Shifting Left vs. Shifting Right—Which Is Right for Your Company?

Check out the article to find out the core differences between shifting left vs. shifting right and decide which direction is right for your company. 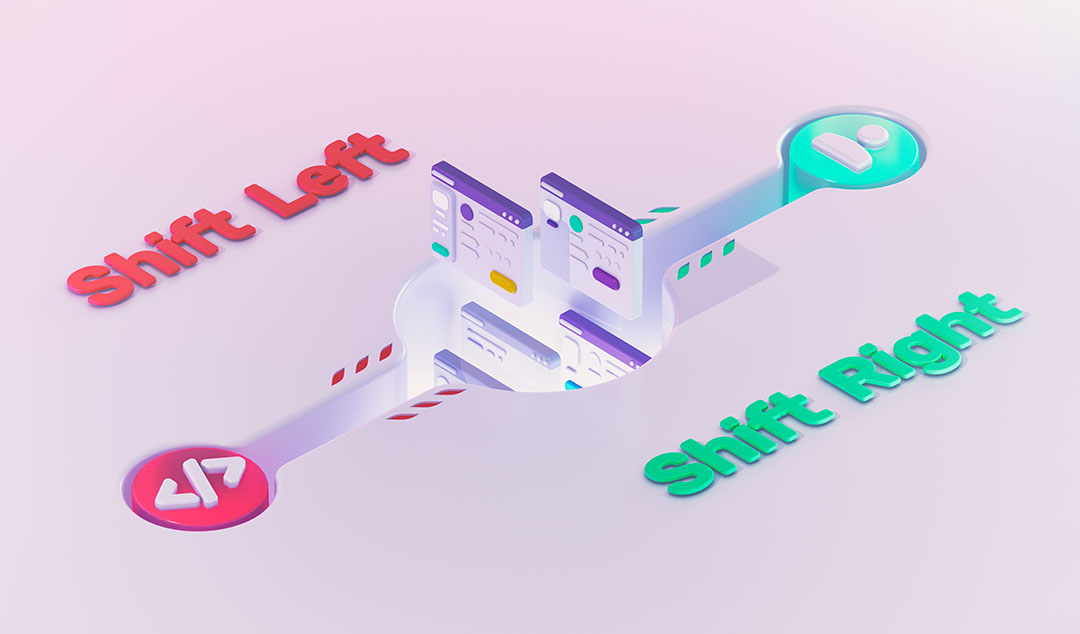 Many companies deploy new code weekly or even daily. So, it’s imperative to find and fix bugs as early as you can. That’s how you deliver higher-quality code. Testing early in the SDLC is essential, but it’s often not enough. Some things remain out of the tester’s purview until real users start interacting with the system. This makes the landscape for software QA incredibly complex and challenging to traverse. In a testing context, you have to decide whether your organization should “shift left” or “shift right.”

If you’re not sure which software testing approach to adopt, don’t worry. We’re going to define both of these terms and the differences between them.

From Waterfall to Agile: How It Started

Before we get to the details of shift-left and shift-right testing, let’s take a look at the history of the terms. You probably know the waterfall model, right? As a recap, this model aligns each development phase in a linear manner. This fixes testing and QA firmly as the last step before release. Everyone is aware of their responsibilities, and the timeline is clear. But this approach has no flexibility and only really works when you have a long delivery timeline.

As a result, modern enterprises increasingly adopt the Agile model for development. This is predicated on reacting fast to changing needs and releasing frequent updates. With the new methods, teams have been able to respond fast to bug fixes and make constant updates, enabling companies to publish new software more often. So, how did we go from Agile to shift-left testing?

Shift-left testing happens when testing is done much early in the software’s lifecycle, often hand-in-hand with the development process. With continuous integration making an impact across various industries, testers can evaluate features as they are being created. This helps ensure better quality software. Importantly, shift-left testing focuses on the functional aspects of an application. It’s a continuous process with consistent communication between the testers, the developers, and the client. You should think of it running in parallel to the development process. As such, it helps teams to find high-level test scenarios and work on comprehensive test cases.

Save time: Shift-left testing helps identify mistakes earlier in the SDLC, eliminating the “let’s fix the bugs once we’re done with the important stuff” mindset.

Better design: Rigorous brainstorming sessions enable testers to detect bottlenecks in advance. These findings may result in new design alternatives or allow teams to improve on the initial idea.

Ensure quality: The shift-left approach enables testers to add an automation tool like unit or API testing into their build process. This helps them assess the quality of the code and find issues when it matters the most, ensuring the delivery of top-quality software for end-users.

For all of its perks, though, shift-left testing neglects user feedback based on actual usage scenarios. And that’s where shift-right testing comes into play.

Shift-right testing involves monitoring your application in the wild where it's exposed to real users. This puts it to the right of the traditional testing phase, hence the name. There are several aims for shift-right testing:

Better customer experience: By shifting right, teams can translate customer feedback into issues for business and technical terms. This helps you isolate each problem, making it easy to improve it to enhance the overall user experience.

Wider test coverage: Shift-right testing helps you cast a wider net for your testing. Testing happens continuously, which means you are more likely to find any bugs. Moreover, you have more data, making it easier to analyse any bugs and identify the steps to recreate them.

As you can see, both shift-left and shift-right bring their own benefits. Agile teams can use the former for smoother implementations, reduced costs, and earlier bug fixes. However, the ability to integrate system and user feedback based on actual scenarios makes shift-right testing equally crucial. Hence, it’s not about which is right for your company; it’s about leveraging the two approaches for optimal performance.

Fortunately, Functionize makes it simple to adopt both approaches. Our AI-driven test automation simplifies test creation, making it easy to shift left. You can run tests from the Functionize Test Cloud against your production system, making shift-right super easy. And all our tests cope seamlessly with application updates and UI changes. Meaning your testers get to focus on what matters—delivering high quality software throughout the SDLC. To see all this in action, sign up for our free trial today.