Contrary to popular belief, automation can slow down software testing. The key to test faster and increase coverage is to eliminate test debt. 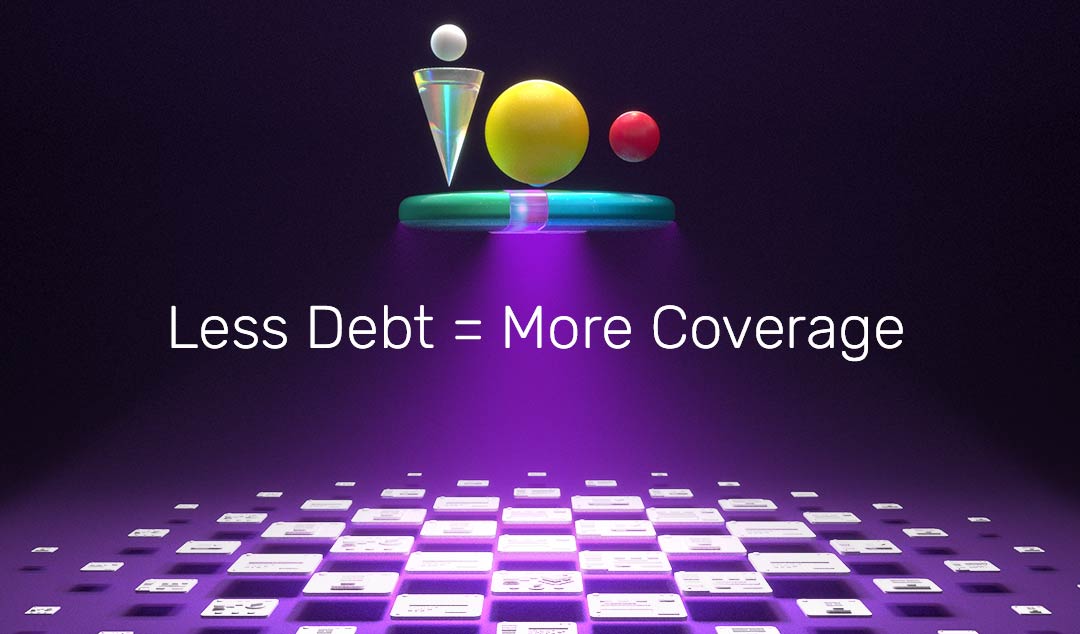 Coverage tends to be one of the most crucial goals of QA teams. Coverage is directly related to the quality of testing and helps testers comprehensively cover areas of the software that are yet to be validated.

The more coverage testers can enforce, the more refined and polished the software can be when it’s ready for release.

However, there are quite a few roadblocks that QA teams have to deal with when it comes to coverage, and one of the most serious is test debt.

Test debt is a debilitating scenario for most QA teams. Test debt can take many forms and can dramatically slow down the testing process. It also has a marked effect on coverage, to the point where eliminating or reducing test debt becomes inherently connected to increasing coverage. For teams looking for the maximum possible coverage, the main requirement is often to deal with test debt.

Test debt can come in various forms. The key to reducing or eliminating test debt is to identify core areas of the testing process where improvements can be brought in to make a palpable difference. A fundamental distinction can be made here regarding test debt as it pertains to unit testing and functional testing.

Test debt often starts as the unit testing phase. Due to the size and complexity of modern software, this is one area where coverage usually only goes so far. Teams have to arrive at a reasonable and practical target coverage percentage to avoid radically delaying the release of the software. As a result, some parts of the software remain little tested.

This is also the case with functional testing, as complex and dynamic UIs might throw up thousands of scenarios and combinations, all of which are practically impossible to test. QA teams, therefore, have to prioritize and allocate resources based on experience.

More importantly, test automation also leads to different forms of test debt. In a lot of ways, that can be tied with the inherent characteristics of legacy test automation platforms. If teams fail to automate enough tests, you have test debt. If teams fail to properly design or optimize the tests or use a sluggish infrastructure to run the tests, you have test debt. The most serious form of test debt is related to test maintenance. As automated tests run, the results need to be checked manually and the tests tweaked or altered to eliminate issues with the tests themselves. This eats into the time of creating new automated tests.

As test maintenance is a lengthy, involved manual process with most legacy test platforms, QA teams can meaningfully increase coverage only if they find a scalable way to deal with maintenance debt. The idea is simple – the less time QA teams have to waste checking test results and fixing broken tests, the more time they can dedicate to creating new tests, which helps increase coverage.

The reason why test maintenance poses such a hurdle has to do with the design of test scripts on legacy test platforms, which are usually done using hardcoded selectors. This can create issues during testing. Different browsers can define the selectors in different ways. Any update to the backend or UI can cause some selectors to change. This can pave the way to hundreds of broken tests. The only way to solve these issues is to manually check the test results and fix the tests wherever needed. However, choosing the appropriate modern test automation platform can also help alleviate these issues. This can be a salient way to manage test maintenance debt and increase coverage.

How Functionize Solves the Problem

The effect is also cumulative as with the passage of time, the AI learns more in depth about the software and is able to make more accurate decisions. This has the effect of significantly speeding up the test creation process as QA teams no longer have to worry about rigorous test maintenance, which directly increases coverage. Another benefit of this approach is that the coverage remains in place over time as the tests are more resilient to change, thanks to the use of machine learning and AI.

If you eliminate the time it takes to maintain tests from the equation, a lot of time and resources can be freed up and employed directly to design more tests and to improve coverage.

Since it has been established that test debt can hurt coverage, and by extension, the quality of the finished software, it makes complete sense to seek out a testing platform that has appropriate measures in place to help QA teams minimize test debt. This gives them a foolproof way to increase coverage and ensure high quality standards. To try out Functionize and see how you can reduce test debt, sign up for a free trial today at functionize.com.

Running Tests Locally? Read this First
What is Parallel Execution?
Why Shorter Tests Are Better
The Counterproductive Nature of Automated Testing
What AI test automation means for me as a QA manager
Functionize as a User Part 4: Test Management Through Machine Learning